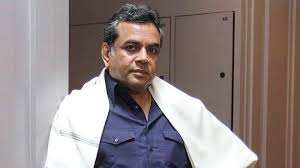 Paresh Rawal supports Muslim Sanskrit professor |Hindu extremist students have staged demonstrations at the ‘Banaras Hindu University BHU in Varanasi, a sacred city in the Indian state of Uttar Pradesh. The BHU administration had appointed Muslim Feroz Khan, a Ph.D. in Sanskrit, as a professor at the university, on which Hindu students started demonstrations. According to India Today, Hindu students protesting are not ready to accept a Muslim person as a ‘Sanskrit’ professor, believing that the teacher of this article can only be a follower of Hinduism.
Banaras Hindu University students staged a protest on social media and other Hindu extremists also came out against the Muslim professor.
Parish Roald Feroz Khan, who played a bad role in Bollywood films, came under heavy criticism of Muslim professors by Hindu extremists and students. Parish Rawal expressed regret over the ongoing protests against the Muslim professor, calling him a nerd on social media and said that he salutes Feroz Khan for his Ph.D. in Sanskrit.

In his serial tweets, Parish Rawal urged those who protested against Muslim Professor Feroz Khan not to associate the ‘Sanskrit’ language with religion. To do the same time, the actor praised the Muslim professor for his Ph.D. in Sanskrit. In another tweet, he further explained that if the language is linked to religion, then the Muslim city of India will not be able to perform the music of the Muslim singer Mohammad Rafi Hindu and the music of the well-known composer Nowshad Sahib will not be able to arrange. Surprisingly, where Hindu students are protesting against becoming a Muslim person’s ‘Sanskrit’ professor, these students are happy to see the role of a Hindu person in films by Muslim actors.

Following the protests by extremist students protesting the deployment of a Muslim man, Banaras Hindu University Anatamiya issued a statement saying it believes in providing equal opportunities to people of all faiths, sects, and races. According to NDTV, although the university administration rejected the protesters’ demands, giving equal opportunity to people of all sects and religions, however, since the day Feroz Khan has been appointed professor. He was not seen at the university. According to the report, protests against Feroz Khan started immediately after his appointment and he has not taken a single class nor has he been seen in the university.
According to the report, Feroz Khan was also locked on the mobile number and could not be contacted despite all efforts.