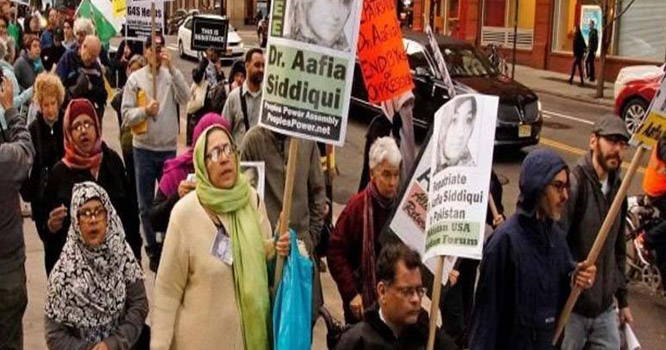 Turkish people arrive on the streets to release Aafia Siddiqui |Friends of the friendly country took to the streets to release Aafia Siddiqui
What the Pakistani people could not do was done by the Turkish people. The release of the American detained and repatriated daughter of Dr. Afia Siddiqui, the victim of the humanity and justice of the international organizations and the Pakistani nation, is a global struggle, and the release of the nation’s daughter Dr. Aafia has arrived in Turkey.

A large demonstration was organized in the city of Istanbul in Turkey on Saturday. In which large numbers of Turkish citizens participated in the demonstration, participants of the demonstration said that their struggle was to keep the oppressed and untrained doctor Afia Siddiqui from US prison. The protesters vowed to continue their struggle until Dr. Aafia’s release. On this occasion, Dr. Aafia’s volunteers, along with the Turkish nationals, launched a campaign with the hashtag #TurkeystandingForAafia, accompanied by Turkish citizens, for the return of Dr. Aafia. Thousands of volunteers from many other countries participated with great enthusiasm. Human rights organizations in Turkey have raised the issue of Dr. Aafia, proving that raising the rights of human rights violators is not necessary for human rights violations if they are against Turkish citizens. Rather, the Turkish people have proved that the struggle for the rights of the oppressed is free from geographical boundaries. Turks protest against the release of Dr. Aafia, also showcasing the unconditional love of Pakistan and its people, which the Aafia Movement welcomes and hopes the ongoing global struggle for Aafia’s release will bring color.