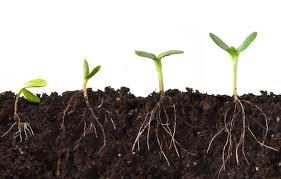 The plants see the roots underground|Sunlight is not limited to leaves and flowers, but it goes to the roots and helps them grow best. In the past, experts have discovered several plant receptors that sense light in flowers, trunks, and leaves and act as signals. But these receptors have also been discovered in the roots of plants, but it is not yet clear how they finally perceive light in the dark soil and how this potential is produced in them. Hu Jin Li, a scientist affiliated with Seoul National University in South Korea, has researched the same question on a mustard plant called Arabidopsis thaliana. They found that the finer roots of the plant acted like precision fiber optic cords whose light emitted from their heads. The light goes down from the root, in which a receptor called phytochrome plays an important role. This process creates a protein called HIV-5, which is very important for plant health. To confirm this, genetic engineering was done in plants to affect phytochrome. At the same time, the production of protein H-Fi decreased and the roots began to wither and wither. The experts then tried to find out, in another surprising experiment, whether light passes through the sun’s vegetation to the root or is emitted as a chemical signal. So it has been confirmed that light passes through the entire plant on a regular basis like fiber optic wire. Thus a regular system of light passing through the plant has emerged, in which red light passes very well. Next comes the blue and then the green light. According to Professor Lee, the light goes to the roots, enriches them with energy.

This 9-Year Old child ready for a Ph.D.