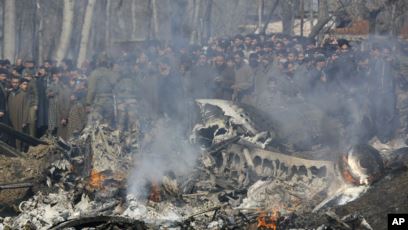 Addressing a media briefing in New Delhi on Friday, Indian Air Force Chief Air Marshal Rakesh Kumar Singh said his helicopter collapse was ‘a grave mistake’. Remember that the day before the helicopter fell at Budgam near Srinagar, India had claimed that it had targeted ‘Jaish Muhammad’s training camp’ in Balakot, Pakistan.

This claim was rejected by Pakistan. The next day, India sent planes to Pakistan, one of which was dropped by the Pak Air Force and its pilot, Abhishek Nandan Wurtman, was arrested.

He was later released by Pakistan under ‘passionate goodwill’. According to the Court of Inquiry, a helicopter was hit by a spider air defense missile system fire at Srinagar Airbus. The inquiry revealed that the air defense personnel considered the Indian helicopter to be an enemy missile, which took place just ten minutes after the helicopter flight. The missile hit the helicopter, split into two pieces and exploded.

He added, “It will not be possible for our pilots to hear what they hear.” No directions found. The Air Force Marshal added that if the Pak Air Force had attacked our military installations on February 27, the war would have escalated. He said Pak Air Force had failed to hit its target and was happy with its failure.
He said the Indian Air Force is ready to fight at short notice and is capable of fighting a long war. The Indian Air Force says legal action is being taken against the two officers. Air Chief Marshal Rakesh Kumar Singh said the investigating court had completed its investigation last week.

Walking for a few days is harmful to health