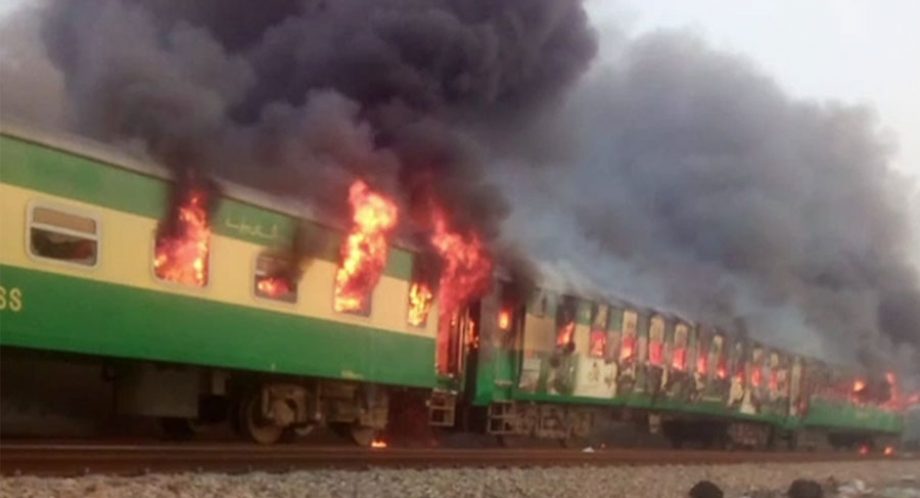 Tezgam Express Caught fire, 74 passengers killed and 90 injured! 74 people were killed and more than 90 injured as a result of a fire in the fast-moving Express from Karachi to Lahore and Rawalpindi.

According to Express-News, the Tezgam Express, going from Karachi to Lahore and Rawalpindi, caught fire. The accident took place near Chanuri Ghat, Tanuri Station, in Rahim Yar Khan, and most of the dead belonged to the Tablighi group who were going to Raiwand to attend the gathering. Flames engulfed three bogeys, killing 74 people and injuring more than 90 people who were shifted to a nearby hospital for medical help. The condition of several injured is critical.

Deputy Commissioner Jamil Ahmed said that the speeding train was set on fire in three air-conditioned and business-class bogies of which 209 were aboard. Many bodies have been unidentified.

Rescue sources said the fire was reportedly caused by the gas cylinder of the passenger class passengers. Two bogies of the Accident Economy class were booked under the name of Amir Hussain and Jamaat. Rescue personnel conducted rescue operations in which Pak Army troops were also involved, while Khanpur, Liaquatpur, and Railway Police also reached the spot

Express-News, the Tezgam Express, going from Karachi to Lahore and Rawalpindi, caught fire.

Emergency was imposed in hospitals across the district following a tragic accident involving a fire in a passenger train, officials said. Rescue 1122, police, fire brigade and other rescue teams arrived on the spot and resumed operation while the injured were shifted to THQ Liaquatpur, RHC Channi Goth and Bahawalpur Victoria Hospital. Railway administration will provide Rs 15 lakh in insurance cover to the victims of the accident while Rs 50,000 to Rs 3 lakh will be given to the injured. Government and other political figures, including Prime Minister Imran Khan, President Arif Alawi, visiting World Bank President David Mel Pass, have expressed deep grief and sorrow over the loss of valuable lives in the accident.

The new benefits of coffee that the world was unaware of