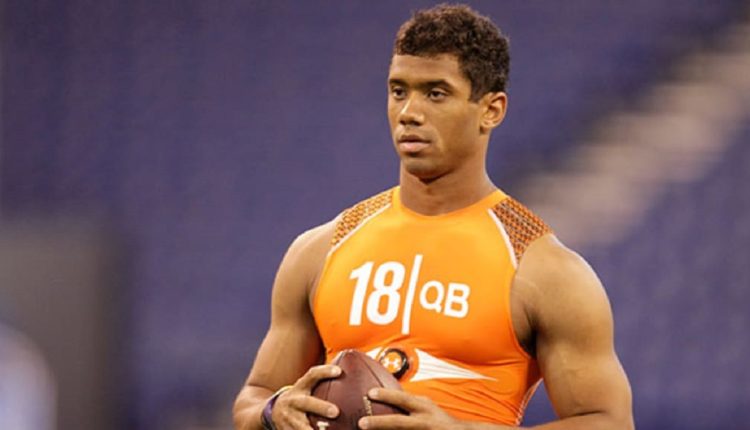 On November 29, 1988, Russell Carrington Wilson was born. He plays quarterback for the Denver Broncos of the National Football League in American football (NFL). He won Super Bowl XLVIII while playing for the Seattle Seahawks in the NFL.

Despite receiving a scholarship from the highly sought-after “Duke University” in 2006, Russell Wilson enrolled at “North Carolina State University.” Russell, a quarterback for NC State, made the all-ACC first team as the first rookie quarterback ever. Coach Tom O’Brien, though, was incensed by his wish to play baseball alongside football.

Major League Baseball’s Colorado Rockies selected Russell in the 2010 draught. That summer, he participated in 32 games for the Tri-City Dust Devils, a Colorado Rockies affiliate. For his final year of college, he later changed to the “University of Wisconsin,” where he played college football in 2011. Russell had a fantastic senior year, leading his squad to the Big Ten championship. He also broke a previous NCAA record thanks to his passing abilities. Even back then, because of his modest stature, he was not considered the best candidate to play in the NFL. Unexpectedly, the well-known NFL team “Seattle Seahawks” began expressing interest in him.

Russell signed a four-year contract with the “Seahawks” in May 2012 and competed in his first preseason game against the “Kansas City Chiefs.” Russell got to play in his first regular-season game against the “Arizona Cardinals” in September of that year. Russell gradually enhanced his performance, and in the tenth week, he received the “Pepsi Rookie of the Week” title. Russell finished the regular season in fourth place among NFL quarterbacks. By the end of the season, he had received USD 222,000 from the NFL’s performance-based pay program for his noteworthy performance in his first campaign.

Russell had a stellar personal record of 26 touchdown passes and 9 interceptions as he wrapped up the 2013 “Super Bowl Season.” He had already received the “NFC Offensive Player of the Week” title for the second time in his career by the 13th week. The “Seahawks” won the NFC championship game against the “San Francisco 49ers,” and they went on to play in “Super Bowl XLVIII.” Thanks to the league’s Performance-Based Program, Russell excelled and received a financial incentive of USD 169,141.

Russell’s deal with the “Seahawks” was extended to four years in July 2015. Russell’s performance wasn’t up to par in the first few games, but he quickly turned in his best effort, becoming the only quarterback in NFL history to complete throws for three or more touchdowns without a pick in five straight games.

Russell shamed other single records throughout the season, including the most passing yards, the best passer rating, and the most throwing touchdowns. He was regarded as one of the top quarterbacks for the “Seahawks” because of his outstanding achievements.

He had the most outstanding passer rating at the end of the year. He was selected by “Team Irvin” as the first pick overall in the 2016 Pro Bowl draught. He scored three touchdowns throughout the contest while throwing no interceptions, earning him the title of “Pro Bowl offensive MVP.” Russell was hurt throughout the 2016 campaign, but he still participated in all 16 games and helped his team win the NFC West. Although Russell’s performance was praised, the Atlanta Falcons eliminated the Seahawks from the 2016 NFL in the Divisional Round.

In a successful performance against the Houston Texans during the 2017 season, Russell surpassed his previous career high with 452 passing yards and four touchdowns. With 63 victories, he surpassed Joe Flacco to become the quarterback with the most victories in the first six seasons. The playoffs were missed by his squad, nevertheless.

Many people thought the Seahawks had little chance of making the playoffs after losing several Pro Bowl starters in the summer, including Cliff Avril, Michael Bennett, Kam Chancellor, Jimmy Graham, and Richard Sherman, and having top safety Earl Thomas injured at the start of the regular season. Wilson had to cope with a recognized roster and a new offensive coordinator in Brian Schottenheimer, who took Darrell Bevell’s place.

Going into the 2018 season, Wilson was again chosen as the Seahawks’ captain. In Week 1’s 27-24 loss to the Denver Broncos, he began the year with 298 passing yards, three touchdowns, and two interceptions. He contributed 192 passing yards and two touchdowns in Week 3 against the Dallas Cowboys, which helped the Seahawks earn their first victory of the year. He recorded three straight games with three passing touchdowns in Weeks 5-8 against the Detroit Lions, Oakland Raiders, and Los Angeles Rams. He recorded 185 throwing yards and four touchdowns in Week 13’s 43-16 win over the San Francisco 49ers.

Wilson became the highest-paid player in the NFL after agreeing to a four-year, $140 million contract deal on April 16 to stay with the Seahawks through the 2023 campaign. Wilson was named the NFC Offensive Player of the Week in Week 2 against the Pittsburgh Steelers after tossing for 300 yards and three touchdowns in the Seahawks’ 28-26 victory. Wilson completed 32 of his attempts for 406 yards and two passing touchdowns in Week 3’s game against the New Orleans Saints. In the 33-27 defeat, he also ran seven times for 51 yards and two running scores. Wilson threw for 268 yards and four touchdowns in Week 5’s 30-29 victory on Thursday Night Football over the Los Angeles Rams.

In the opening game of the 2020 NFL season against the Atlanta Falcons, Wilson completed 31 of 35 passes for 322 yards and four passing touchdowns. For his efforts in Week 1, he was named the NFC Offensive Player of the Week. In Week 2’s 35-30 victory over the New England Patriots on NBC Sunday Night Football, he threw for 288 yards, five touchdowns, and one interception. Wilson maintained his strong start to the season with 315 passing yards and five touchdowns in the 38-31 victory over the Dallas Cowboys.

After breaking his finger, Wilson departed the game in the third quarter of the Seahawk’s Week 5 loss to the Los Angeles Rams. On October 8, 2021, a procedure to fix the damage was performed. He was ruled out of the Seahawks Week 6 matchup against the Pittsburgh Steelers on October 15, 2021. It was the first game of his career that he missed, breaking the sixth-longest streak in NFL history of an NFL quarterback starting 149 straight games. Later that day, he was put on injured reserve, guaranteeing he would at least miss the following three games. On November 12, he was taken off injured reserve. As the Seahawks concluded the season with a 7-10 record, Wilson finished the campaign with 3,113 passing yards, 25 touchdowns, six interceptions, and two more rushing touchdowns.

Wilson and Ashton Meem became friends when they were both in high school. After being hitched in January 2012, they separated in April 2014. Wilson is wed to Ciara, an American R&B singer. Early in 2015, they started dating, and on March 11, 2016, they declared their engagement. On July 6, 2016, they exchanged vows at Peckforton Castle in Cheshire, England. She had a son with Future, who is now his stepson. April 28, 2017, saw the birth of their daughter. They announced they were expecting their second child together on January 30, 2020. They welcomed a boy on July 23, 2020. In 2022, the couple paid $25 million for a house in Cherry Hills Village, Colorado, breaking the previous record for the most expensive residential real estate transaction in the Denver metro area.