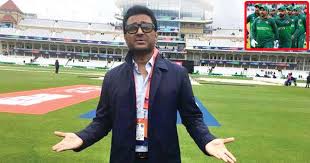 Rajasthan, Sanjay Manjrekar expressed surprise at Pakistan’s T20 rankings|Former Indian cricketer Sanjay Manjrekar came to comment on the third and final T20 match between India and South Africa, while the broadcaster hit the graphic screen of the ICT20 team rankings. Sanjay Manjrekar was surprised to see Pakistan at number one and said, “I wonder how the Pakistani team is at number one.”
Perhaps Sanjay Manjrekar has forgotten that the Pakistan team has won a record in 11 consecutive series and has won the first position. Pakistan cricket team is first with 283 points, England is second with 266 points while South Africa is third with 262 points after drawing the series. Yes, the Indian team is now fourth with 263 points while Australia is fifth with 261 points. Remember that Sanjay Manjrekar has been spotted by commentators who praise the Indian team, and especially Dhoni and Kohli, who sometimes go beyond words…

How many billion dollars are investing in Pakistan?