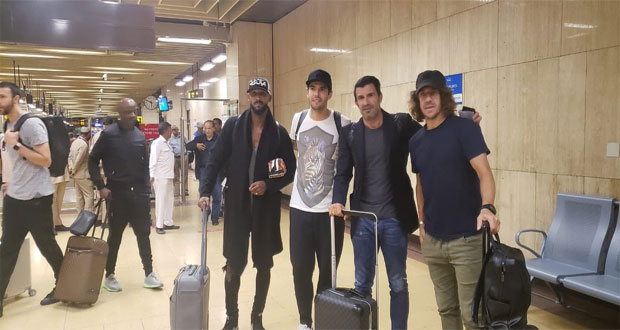 Pakistan’s arrival of world-renowned footballers|World-renowned footballers Ricardo Kaka, Luis Figo, Carlos Powell, and Nicholas Anelka have arrived in Pakistan to promote football in Pakistan. According to the details, all four footballers arrived at Jinnah International Airport in Karachi, where they were welcomed and they wore a traditional hat and ginger. All four footballers have reached Pakistan for a visit to the World Soccer Stars, which will be in action in Karachi and Lahore tomorrow. The World Soccer Stars will face Karachi FC’s Karachi Rahat Stadium for the first match this evening, in which Pakistan football team captain Saddam Hussein will also take part. There will be a media session before the match and after that, the fans will meet at the local mall, while tomorrow’s match will be from Team Figo in Lahore. Spain’s Carlos Powell will be part of the team Figo while Nicholas Anelka is on the side. Local footballers from Pakistan will also participate in the match.