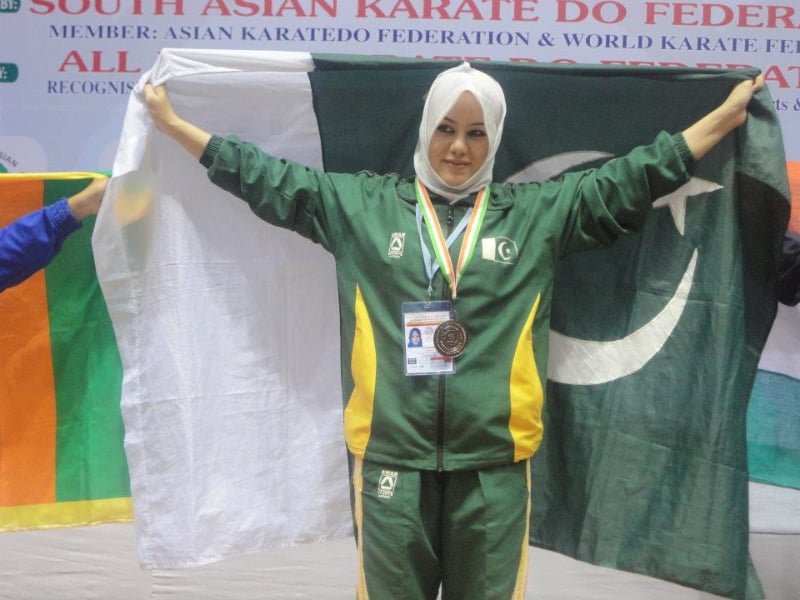 Pakistani girl karate superstar wins 38 gold medals |Pakistan’s ‘Karate Superstar’ woman who won 38 gold medals at an early age. Kulsoom Hazara, 31, a ‘karate superstar’ female in Pakistan, however, faced other issues including parental deprivation at an early age. However, he bravely, courageously and passionately overlooked his problems and compulsions, and at the age of 31, earned the unique honor of winning 38 gold medals at Karate Events, both nationally and internationally. Born on September 4, 1988, in Quetta, the capital of Balochistan, Kulsoom Hazara lives in Karachi, the capital of Sindh province, and also operates the Karate Center. When Kulsoom Hazara was just 2 years old, her mother passed away and her father admitted her to the Karate Center at the age of just 5 years. Kulsoom Hazara, who was admitted to the karate center, used to run his cousin who later became his brother-in-law and married Kulsoom’s older sister. Kulsoom Hazara was the youngest of three sisters and a brother, and when she was only 9 years old, her father died suddenly of heart failure. Before reaching the age of ten, Kalsum’s parents were shadowed and their sister-in-law was raised by their karate trainer.

Kulsoom Hazara participated in every karate tournament despite all odds and won a gold medal in almost every domestic tournament. Only at the age of 31, where Kulsoom Hazara retained karate, he continued his education and also got a Master’s degree in ‘Health’ and ‘Physical Education’ from the University of Karachi. Kulsoom Hazara has won 35 35 country gold medals, 2 bronze, and one silver medal at various provincial and domestic game events in the country since 2000, while also representing the karate team of various organizations. Kulsoom Hazara first represented Pakistan in karate globally in 2005 and participated in the ‘Islamic Women Games’ in Tehran, where she took the fifth position. Kulsoom Hazara won three gold medals at various World and South Asian Championships by 2019, while she finished fifth in five championships. Kulsoom Hazara also named three silver and one bronze medal at the World Champion Shops and now she wants to work as a fitness trainer, including preparing women for the karate sector in the future.