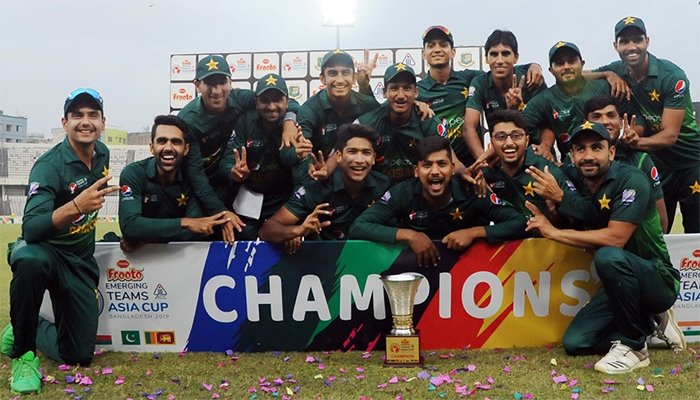 Pakistan becomes champion of the Emerging Asia Cup |Rohil Nazir’s century, Pakistan becomes champion of the Emerging Asia Cup. Pakistan won the championship by beating Bangladesh by 77 runs in the final of the Emerging Asia Cup thanks to Rohil Nazir’s brilliant century. Bangladesh won the toss and decided to bowl first in the final of the event played at Dhaka’s Sher Bangladesh National Stadium. Pakistan, with Rohit Nazir’s brilliant batting as well as responsible batting of the other batsmen, added a score of 301 runs for the loss of six wickets. Rohil Nazir scored 113 runs with 3 sixes and 12 fours while Imran Rafiq scored 62, Captain Saud Shakil 42 and Khushal Shah 27 runs. For Bangladesh, Zaman Khan was the most successful bowler with three wickets while Hassan Mahmood took two wickets. In pursuit of the target, the batsmen of Bangladesh team set wickets on the wicket and nobody tried to play big innings and the entire team was bowled out for 224 before 39 balls.

Atif Hussain was the most successful batsman with 49 while the other notable players were Najamul Hasan Shantou, 46, Mehdi Hassan 42 and Yasir Ali. The most successful bowler from Pakistan was Mohammad Hassanin who got 3 wickets while Khushal Shah and Saif Badar took two wickets each. Rohil Nazir was declared the best player of the match for scoring a brilliant century, while displaying the surprisingly biased attitude, Somia Sarkar, who scored 244 runs in the event rather than any Pakistani player, was selected as the best player of the series.

It is noteworthy that Rohil Nazir of Pakistan was the most successful batsman with 302 runs in the event but he was not given the Man of the Series award. Similarly, Mohammad Hassan took 13 wickets in the bowling while Khushk Shah took 139 wickets with 189 runs but he was still not considered Man of the Series.

Coke Studio Could Not Be Released