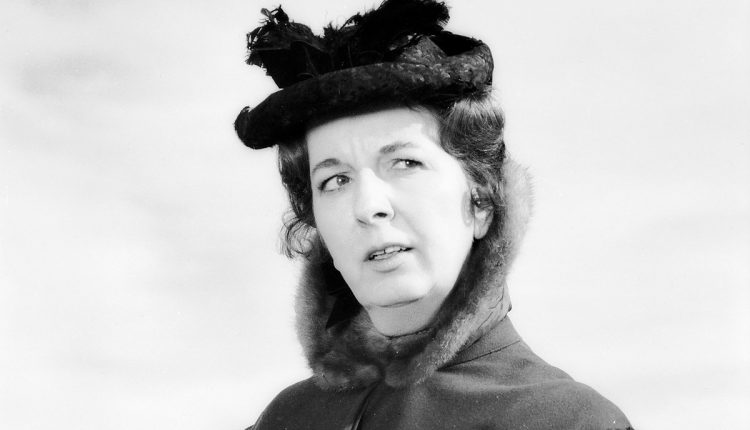 On June 13, 1910, Mary Wickes was born. She was an actress from the USA. She frequently portrayed supporting characters in the form of prim, professional ladies, secretaries, nurses, nuns, therapists, instructors, and housekeepers who would quip ironically when the main characters didn’t live up to her high expectations.

In the final years of her life, Wickes experienced a variety of illnesses that together led to her being hospitalized, where she fell and broke her hip, necessitating surgery. At the UCLA Medical Center in Los Angeles, she passed away from complications following surgery on October 22, 1995, when she was 85 years old.

American actress and theatre performer Mary Wickes appeared in more than 50 films and more than a dozen plays. Through the different roles she played throughout her acting career as a nurse, secretary, housekeeper, spinster, stepmother, etc., her versatility was evident. Mary, who had excelled academically throughout high school and college, decided to attempt theatre when her favorite professor suggested it. She was a fantastic artist who gave everything she had to every part, yet despite this, she never truly broke into the public and remained a scene-stealer.

She once quipped, “They may not ask for my autograph, as long as they sign my paycheck.” In the Broadway production of “The Man Who Came to Dinner” in 1939, she had her first notable performance. She portrayed a nurse, and in 1942, she appeared in the same film in a different capacity. She also starred in the films “Now, Voyager,” “June Bride,” “Sister Act,” and “Little Women.” Additionally, she had roles in more than 60 television programs, including “Dennis the Menace,” “Temple Houston,” “Here’s Lucy,” “Highway to Heaven,” and others.

Frank Wickenhauser is the father.

Isabella Wickenhauser is the mother.

She studied at “Washington University” in St. Louis and earned a double major in political science and English in 1930.

Mary’s parents frequently took her to see different plays because they loved watching movies. That may be the reason Mary decides to take her professor’s counsel and pursue an acting profession.

In 1934, Mary made her Broadway debut in Marc Connelly’s “The Farmer Takes a Wife.” She kept honing her talent while appearing in plays such as “Spring Dance,” “Open Door,” and “Hitch Your Wagon,” among others.

Mary also participated in the 1938 production of “Danton’s Death,” a drama by Orson Welles’ Mercury Theatre group. Mary gained fresh employment prospects in 1939 when she portrayed Miss Preen, a hard-played nurse with a potty tongue, in George S. Kaufman’s “The Man Who Came to Dinner.”

Mary played “Mrs. Battison” in the 1938 short film “Too Much Johnson,” but it wasn’t until 2008 that the long-lost print was found. The film had its world premiere at the Pordenone Silent Film Festival in late 2013 and was afterward made available online.

She appeared in several Hollywood productions in 1942, including “Blondie Blessed Event,” “Private Buckaroo,” “The Mayor of 44th Street,” and “Who Done It?” She gained notoriety for her role as a crazy nurse in the film “Now, Voyager,” which also determined the course of her comedic career.

In the 1995 animated series “Life with Louie,” she also provided the voice of Grandma.

For her work in “The Gertrude Berg Show,” Mary was nominated for an “Emmy Award” in 1962 for “Outstanding Performance in a Supporting Role by an Actress.”

She received an honorary “Doctor of Arts” degree from Washington University, her alma mater. In 2004, she was given a posthumous induction onto the St. Louis Walk of Fame.

Wickes never wed and never gave birth to any kids. She donated her entire estate and all of her funds to Washington University in St. Louis to establish “The Isabella and Frank Wickenhauser Memorial Library Fund for Television, Film and Theatre Arts.”

In the final years of her life, Mary battled several illnesses and physical problems. She suffered from kidney failure, low blood pressure, anemia, respiratory issues, breast cancer that was not yet in remission, gastrointestinal hemorrhage, and other conditions.

Wickes left a sizable estate and established the Isabella and Frank Wickenhauser Memorial Library Fund for Television, Film, and Theater Arts at Washington University in St. Louis with a $2 million legacy in honor of her parents. Wickes had always been a Republican.

Mary Wickens is quietly interred in Shiloh, Illinois’ “Shiloh Valley Cemetery.” Her parents were buried next to her.