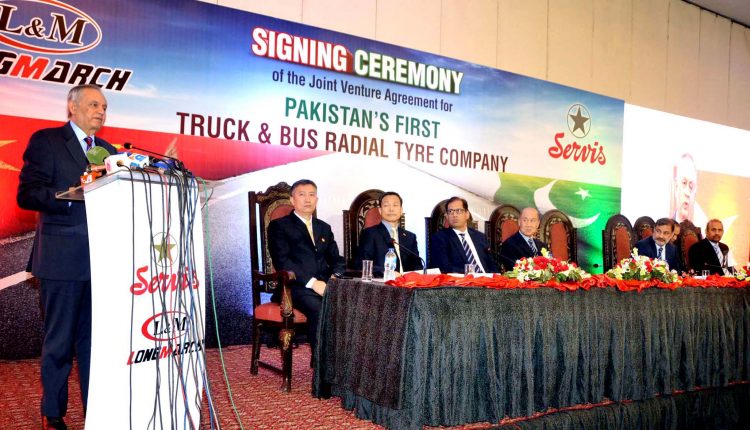 The company holds the highest and unique position in the export of footwear and tires across Pakistan. According to the spokesperson, under this agreement, Service Industries Limited will own 51% and Chaoyang Long March Tire Co., Ltd. 49% stake in this new company, named as Long March Tires (Private) Limited. In this regard, a $ 250 million project for the first phase will be launched on the site of $ 100 million in Sindh. Land and plant designs have also been started for the project. We have over 50 years of extensive experience in the tire industry, and not only does our brand receive the highest caliber across the country, but we also distribute,” said Mr. Arif Saeed, CEO, Service Industries Limited. In terms of the largest network.

He added that in the form of the Long March, we have found a high-achieving partner who not only has a place in the use of technology but also has the same ideology of both of us. Together we will make this a world-class company in collaboration. Speaking at the signing ceremony of the agreement, Zhou or chairman of Ning Long March Tire Co., Ltd. said Long March is a global brand. In terms of expanding our company, we reviewed a number of countries and decided that Pakistan is the country that gave us a big local market, sophisticated policies and a good and skilled workforce to work with,” he said. Providing a great opportunity with supply. He added that we are happy to work with our Local Partnership Services Industries Ltd. Their extensive experience and their 3,000 skilled referrals will prove to be an asset to our joint venture. We look forward to exporting tires worldwide from our new factory. According to the spokesperson, Mr. Abdul Razzaq Daud, Advisor on Trade, Industry, Textiles, and Investment, attended the ceremony as a special guest. In addition, Mr. Long Dunn Bin, Chairman, Council General of the People’s Republic of China, was the Chairman. Mr. Zubair Gilani, business community members, and media persons also attended.