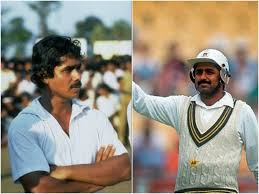 Javed Miandad and Bandula Warnapura Rawalpindi Test|Javed Miandad and Bandula Warnapura will be the special guests in the first Test match between Pakistan and Sri Lanka in Rawalpindi. The Pakistan Cricket Board has invited former Sri Lankan captain Bandula Warnapura and former national cricket team captain Javed Miandad to attend the special Rawalpindi Test as a guest. The Pakistan Cricket Board has made this decision in view of the services of both former captains for cricket. The first match between Pakistan and Sri Lanka in the history of Test cricket was played in March 1982 at the National Stadium Karachi. Pakistan Cricket Team Javed Miandad and Sri Lanka Cricket team were led by Bandula Warnapura in the match. Pakistan won the match by 204 runs. The host team declared 396 runs in the first innings of the match and 301 for 4 wickets in the second innings. The guest team was outscored by 344 in the first innings and 149 in the second innings. Javed Miandad and Bandula Warnapura will also participate in a series of trophy photoshoots on December 10, before the test match between the two teams. A special event will be held in Pindi Cricket Stadium in recognition of the services of both former cricketers during the lunch break on the first day of the scheduled match. On the other hand, Chairman PCB Ehsan Mani said that upon accepting the invitation of the Pakistan Cricket Board, they are appreciative of the two former captains who are returning to Pindi Cricket Stadium Rawalpindi from their busy schedule. “This is good news for Pakistan cricket and its fans,” he said. Ehsan Mani said December 11 is an important day in the history of national cricket and he will celebrate it with Javed Miandad and Bandola VarnaPura. He said that these are icons for which there is no service for cricket, the Pakistan Cricket Board is an endorsement of former cricketers and this is an example of that. He said that PCB will continue to take such steps while acknowledging the services of former cricketers.