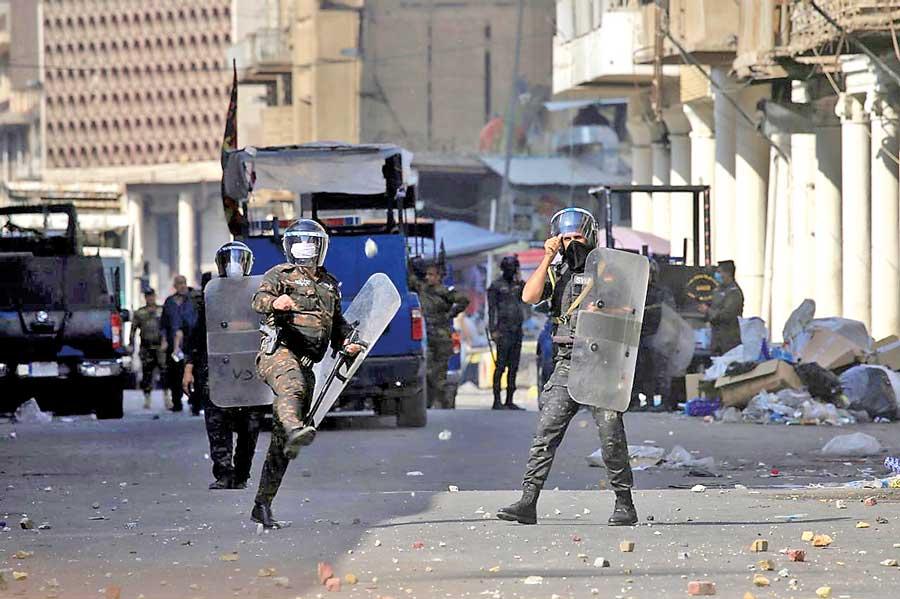 Iraqi security forces shoot 35 dead |Iraqi violence continues, security forces shoot 35 dead. Anti-government protests have intensified in Iraq, and firing on police demonstrators has killed 35 people and injured dozens more. Protests against the government in Iraq are intensifying with each passing day, and angry protesters set ablaze the Iranian consulate in Najaf yesterday. However, the Iranian consulate staff was safe from any damage and managed to exit the rear of the building, after which the authorities imposed a curfew. The series of protests continues from October 1, where protesters are calling on Iran-backed government to resign after accusing them of involvement in corruption, complaints about public works and rising unemployment rates. However, the most serious indictment of the protesters is that the Iraqi government is oppressing its own people in order to support and defend Iran.
On Thursday, the highest number of casualties occurred in Nazareth where police opened fire on protesters over obstacles on a bridge, killing at least 29 people. Medical sources say dozens of people were injured as a result of the police shooting.
The protesters were conducting a sit-in at the entrance of Nazareth, and police and security forces fired indiscriminately to disperse the closed streets and protesters for several days.
Then thousands of people took to the streets, chasing curfew restrictions so they could bury their relatives and loved ones who died in the police shootings.
In addition, at least 4 people were killed as a result of firing on police demonstrators at the Dijla River in the capital Baghdad, while two more were killed as a result of clashes in Najaf. According to security officials, the protesters were shot at Ahrar Bridge in an attempt to cross the barrier.
An eyewitness who was seen burning the Iranian consulate in Najaf told British news agency ‘Reuters’ on condition of anonymity that police and security forces in Najaf were firing on us as if we were. The whole of Iraq is on fire. Another participant in the demonstration bravely responded to the Iranian consulate’s incident, saying that we do not need Iranians; we will take revenge on those killed in Iran. Iraqi Foreign Ministry condemns the consulate’s burning incident, demanding security forces deal with angry people with their hands. Despite mass protests and civilian casualties, the Iraqi government is not showing any flexibility to negotiate with protesters. The government proposed the reforms by offering talks to the protesters, but the protesters dismissed them as showing off.

Prime Minister Adel Abdul Mahdi has rejected the protesters’ demand for his resignation, and an important meeting chaired by him was attended by government officials as well as the commander of Iran’s revolutionary revolution. Meanwhile, Iraq’s popular religious leader, Muqtada al-Sadr, has called on the government to step down again, warning protesters not to take the law into their own hands. In a message to the protesters on Twitter, he said they should stay away from sacred places and do not give them an excuse to end their revolution. Iraqi violent protests have killed at least 350 people so far.