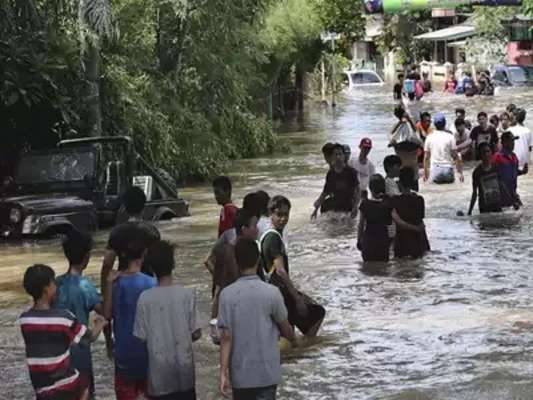 Indonesia’s death toll rises to 53 from floods|Thousands of people have been displaced and 53 have been killed in floods following stormy rains in the Indonesian capital Jakarta and the suburbs. According to the French news agency AFP, more than 100,000 people are forced to live in shelters after the floods sank the area. The Disaster Agency of Indonesia said that the death toll from the flood had reached 53 while one person is still missing. The torrential rains that started on New Year’s Day caused floods and land sliding. Those affected after the floods are forced to live in temporary shelters, including children while suffering severe water and food shortages. We are in dire need of clean water at this shelter,” said Tarima Kanti, a refugee in Jakarta’s western region. On the other hand, in the Bekasi area on the eastern outskirts of Jakarta, there are piles of debris and broken vehicles on swampy roads, while traces of floodwater are present on the second floor of the buildings. Water levels have been reduced in many areas while electricity has been restored in hundreds of districts. The Indonesian Ministry of Health says it has deployed 11,000 health workers and soldiers for the distribution of medicines, bacterial hygiene kits, and food so that other diseases, including hepatitis A, dengue fever, deadly infections, Be avoided. In addition, members of a family near Jakarta were killed by suspected poisonous gas from a generator, including children aged 4 and 9, while an 8-year-old boy died as a result of land sliding. Others died as a result of drowning and hypothermia, while a 16-year-old boy died as a result of the current onset. It should be noted that in Indonesia, after frequent rains, people are often confronted with stormy conditions as well as catastrophic events. However, the worst floods and monsoon rains in Jakarta since 2013 have left dozens of people dead. Urban planning experts said the disaster was due to record rains.

The Donkey King movie will be released in Colombia