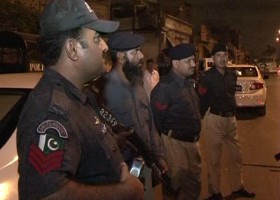 In Pakistan, the dead graze their Pir | Pir exemplifies the love and devotion of the disciples. Believers leave homes and worship in shrines and shrines. But in the Shalimar area of Lahore, strange behavior was reported by the patients, an example of which could not be found. As a result of inappropriate and inhumane actions of patients, the law was mobilized, and area police arrested 12 people, including three women.
The men described themselves as pirates and stole the remains from his grave, police said. Locals said the tomb was buried 45 years ago in a shrine known as Lala Shah on Monday, and people from far away came to the shrine with devotion. However, last night some people entered the shrine and dug a tomb and stole the remains of Pir.

According to the family, Jalil, a resident of Sukkur city of Sindh, with the help of his colleagues, dug a grave at night and extracted the remains of Pir. As soon as the incident was reported, the local area informed the police, after which the police arrested the man, along with his associates, who tried to snatch the remains of the body. Later, with the help of locals and the administration, police re-buried Nash in the Shalimar area, while further investigation is underway with the arrested suspects.
The area said that the dispute over the shrine had been going on for a long time and that anyone who had stolen the remains quarreled many times in the shrine and the neighborhood. It is necessary.