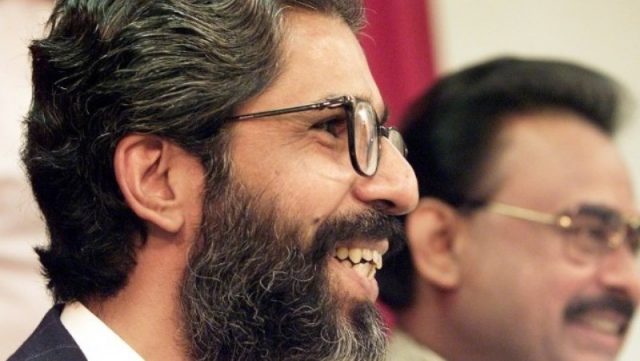 Imran Farooq murder case UK police submit crucial evidence |British witnesses submit key evidence in Islamabad’s Anti-Terrorism Court ATC in the murder case of Muttahida Qaumi Movement MQM leader Dr. Imran Farooq. Islamabad Anti-Terrorism Court Judge Shah Rukh Arjmand heard the Imran Farooq murder case. At the hearing, three British witnesses also appeared in court to record their statement, including the Chief Inspector, Sergeant, and Constable of the British Police. In connection with the arrival of British witnesses, very strict security arrangements have been made at the Judicial Complex and fresh forces of Islamabad Police have also been deployed on the sides of the Judicial Complex. At the same time, all three accused Khalid Shamim, Mohsin, and Mozam Ali have been presented in the ATC.

Writing his statement in the Anti-Terrorism Court, Chief Investigation Officer Stuart Greenway said the investigation into the Imran Farooq case was named Operation History. Chief Investigation Officer presents documents, emails, his education record, the college attendance record for accused Mohsin Ali’s arrival in the court. He also presented the device murder, CCTV footage of the incident, a brick, 2 sharp knives, a fingerprint crime scene, and a map. During the hearing, the accused, Muzam Ali, requested to open the handcuffs with one hand. ? Mozam Ali said that the handcuffs were done on both hands for 4 hours. There is less space between the hands, on which Judge Shah Rukh Arjmand gave remarks that you should sit down and do something. After the statement of Chief Investigation Officer Stover Greenway, who arrived from London in the Imran Farooq murder case, his statement in the Anti-Terrorism Court was also completed.

During the hearing, Judge Shah Rukh Arjmand demanded that the names of more witnesses be disclosed to the court.
Judge Shah Rukh Arjmand asked the prosecutor whether the witnesses would be presented in private or the statement would be recorded through a video link. To which prosecutor Khawaja Imtiaz said the statements of witnesses would be recorded through video link. The prosecutor informed the court that I would compile the list at the next hearing and provide it to the court. The court asked that the FIA submit a list of witnesses with a video link on December 5, except that the lawyer’s objection to the case was made part of the record, while the original documents were returned to the British Investigation Team, on which the lawyer cleared. The objection was also made by Later, the Anti-Terrorism Court adjourned the hearing of Imran Farooq murder case till December 5. It is understood that British authorities had submitted evidence at a hearing last month which included CCTV footage of the murder, forensic and post-mortem reports, recovered memo, investigating officers and statements of 23 other witnesses.
The two accused named Khalid Shamim and Syed Mohsin Ali have already filed their confession before the magistrate, stating the reason for the murder, saying that Imran Farooq was a threat to the founder’s leadership.
However, the third accused, Muzam Ali, has not yet recorded his confession. Khalid Shamim also acknowledged that the murder of Dr. Imran Farooq was a birthday gift to the founder of MQM, while Mohsin Ali revealed that he assisted in the murder because he was given the MQM’s London Secretariat. I was promised a position. The founding general secretary of the United National Movement, Dr. Imran Farooq, was assassinated on September 16, 2010, outside his home in the Green Lane area of Edgeware, London. British police raided the MQM leader’s house and London office in December 2012 to investigate the case. Money laundering investigations began after the raid amounted to more than £ 5m Mohsin Ali Syed, 29, had been living in the UK from February to September 2010, while 34-year-old Mohammad Kashif Khan Kamran arrived in the UK in early September 2010, according to photos released on the British police website. Both men were based in Stanmore, north London, and left the UK on the evening of the murder of Dr. Imran Farooq. In June 2015 two suspects Mohsin Ali and Khalid Shamim were arrested from Chaman while Muzam Ali was arrested from a house near Nine Zero in Karachi. The three accused were shifted to Islamabad after their arrest where they were under FIA custody, a Joint Investigation Team JIT was constituted to investigate the accused. On December 1, 2015, Federal Interior Minister Chaudhry Nisar Ali Khan announced the filing of the Imran Farooq murder case in Pakistan. On December 5, 2015, the government of Pakistan filed a lawsuit against founder MQM Altaf Hussain, who was sued by FIA Director of Anti-Terrorism Prize Ghani. MQM leaders Mohammed Ali Khan, Khalid Shamim, Kashif Khan Kamran, and Syed Mohsin Ali were also named in the case.
The trial included charges of conspiring to murder Dr. Imran Farooq and providing help to the killers, while the trial included sections 34, 109, 120b, 302 and 7 of the Anti-Terrorism Act. On December 6, 2015, the three suspects Mozam Ali, Syed Mohsin and Khalid Shamim were handed over to the FIA on a one-day transit remand. On January 8, 2016, two of the accused involved in the case confessed to the deputy commissioner of Islamabad.
The accused Mohsin Ali and Khalid Shamim had confessed to the crime, while the main accused, Moammed Ali, was denied the crime.

There was a significant breakthrough in the Imran Farooq murder case on January 9, 2016, when the arrested accused made several important revelations in their confession before the magistrate. The arrested suspects admitted that Imran Farooq was murdered at the behest of MQM senior leader Mohammad Anwar because Mohammed Anwar believed that Imran Farooq wanted to form a separate group. The accused Kashif had revealed that the leadership of the party had ordered that the murder of Imran Farooq, during which he had been informed that the accused had phoned the chief and informed him in the code word ‘Mum’s morning,’ which meant Imran Farooq was killed. It should be noted that the accused is said to have been killed in connection with Kashif. On April 21, 2016, the Federal Capital Anti-Terrorism Court, hearing the case of Dr. Imran Farooq’s murder case, ordered that the case be sent to the Chief Justice Islamabad High Court. A video statement by Khalid Shamim, the main accused in the Imran Farooq assassination case, on April 29, 2016, created unrest in government and political circles. In prison, Khalid Shamim had alleged in the video that MQM leader Altaf Hussain was involved in the murder of Dr. Imran Farooq. In the video, Khalid Shamim said that when Imran Farooq’s body was brought to Pakistan, he Altaf Hussain called Mustafa Kamal and said that it was done. May 04, 2016 In the Federal Capital Anti-Terrorism Court, the interim challan of the Imran Farooq murder case was presented for the seventh time, which was approved by the court from May 12 in Adila jail. The Scotland Yard team, who arrived in Pakistan on May 28, returned to the UK, interviewed the suspects arrested in Pakistan in connection with the Imran Farooq murder case and also reviewed the confessional statements made by Pakistani investigating agencies.

On November 10, 2016, the accused Khalid Shamim said in a confessional statement that he had set a date for the killing of Imran Farooq, September 16, to give Muttahida Qaumi Movement founder Altaf Hussain a birthday present. It may be recalled that in the Imran Farooq murder case, London police have so far investigated more than 7697 documents and questioned 4556 persons, while 4323 items were seized. London police appealed to the public for help in accessing the killers, while a £ 20,000 reward was announced for providing information on the killer.