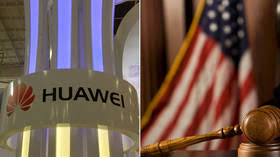 Huawei blamed it on the United States.

Chinese company Huawei has accused the US government of interfering with its networks and harassing employees. The allegations will be a new factor in escalating the ongoing dispute between the United States and Huawei as US officials believe the Chinese government is using the company for espionage, while repeatedly denied by the company. It is See also: Huawei is ready to launch your map compared to Google’s most popular Maps app. In a statement released this week, Huawei said, “The US government is trying to influence the normal business practices of Huawei and its partners by using illegal means, including to hack the company’s internal information systems. The statement did not provide further details, such as how successful the attacks were. See also: Huawei banning time in the US! White House official.

Huawei claims that company employees are being harassed by law enforcement agencies and raided their homes. The statement was issued in a Wall Street Journal report last week that the US Department of Justice is investigating allegations of stealing a smartphone camera patent from a company. The company denied the allegations in the statement. Remember that US President Donald Trump blacklisted Huawei in an executive order in May this year and ordered American companies to cut business ties with Huawei. However, after a full suspension of the ban, the Chinese company was issued a temporary license for 90 days, which allowed Huawei to update its Android phone. The temporary license expired on August 19, but US Commerce Secretary Wilbur Roush once again spoke to Fox Business and announced the issuance of a temporary license for 90 days, which expires November 19. See also: Will Motorola Be Like Foldable Razor Phone? The video has just arrived. Despite the sanctions, US sanctions on Huawei are causing various problems as several major technology companies have severed ties with the Chinese company, which has restricted access to key software and components.

A Google spokeswoman said last week that Huawei’s temporary license to release US sanctions would not apply to the company’s new product and could potentially include Google Play Store, Google Apps, and licenses in the Mate 30 series. I can’t use the Android operating system. Google later explained that Huawei can use Android because it is an open-source operating system, but it is still possible to not have a license for Google Apps.

In foods that open tight and closed arteries that you may not yet know?

Smartphones equipped with the first 64-megapixel camera can now be purchased.