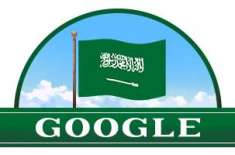 Google Doodle was also decorated with the Saudi flag on Saudi Arabia’s Day|Saudi Arabia’s 89th National Day was celebrated with great enthusiasm yesterday. The Google Doodle was also decorated with the Saudi flag on this occasion. On this Google Doodle, the Saudi flag flies loudly. Clicking on this doodle shows photos, videos, and articles about Saudi Arabia’s national day.
Saudi social media users praised Google for planting the national flag of Saudi Arabia. And it shows that Google is bringing Saudi Arabia’s national day of happiness to another world. Saudi Arabia was the first to launch on Google Doodle in 2018 last year. While earlier in 2017, Doodle was decorated with various Saudi costumes in Saudi Arabia in Abu Dhabi and Abaya.
It should be noted that in Saudi Arabia, the 89th-anniversary celebrations are going on from September 19, 2019, and will continue till 11 PM on September 11, 2019. According to the emergency website, concerts were held in different cities that day. In addition, there were spectacular fireworks demonstrations. The biggest events of that day took place in Jeddah and Riyadh, while other cities also had festivals.
These programs were arranged by the Saudi Recreation Authority. According to the authority, on the occasion of National Day, 7 million fireworks demonstrations were carried out in different areas of the Saudi state. So that people can enjoy colorful landscapes scattered across the sky from a distance. In this regard, the fireworks display in the Cornish area of Jeddah was spectacular. In addition, various commercial goods were also decorated with electrical imprints…

What important nutrients should be used during pregnancy?

The earthquake did not come but was brought