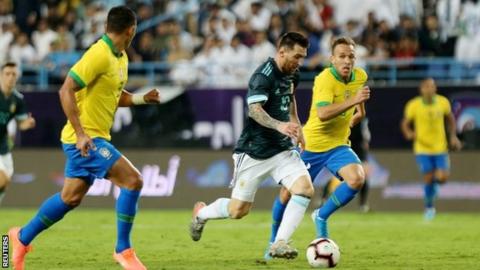 Friendly Football Match, Argentina Defeat Brazil|Argentina beat Brazil team in a friendly match, Lionel Messi, who was part of the team 3 months later, performed brilliantly, the only goal from the winning team was Lionel Messi, both teams in the match. The players also appeared to be confused. Argentine star footballer Lionel Messi was back in the squad after a 3-month ban, and Argentina defeated Brazil in a one-sided match in a friendly match in Saudi Arabia. The two teams started aggressively from the start and the players looked confused. The players of both teams continued to snatch each other. The Brazilian team had a chance to score in the 10th minute, but the Brazilian player failed to score on a Gabriel penalty. In the thirteenth minute, Argentina’s team got a penalty, with star footballer Lionel Messi scoring a huge goal, which led to the Argentine team’s win. Both teams failed to score in the second half, and the Argentine team made a zero-match match.

Did Brad Pitt push for marriage to Angelina Jolie?