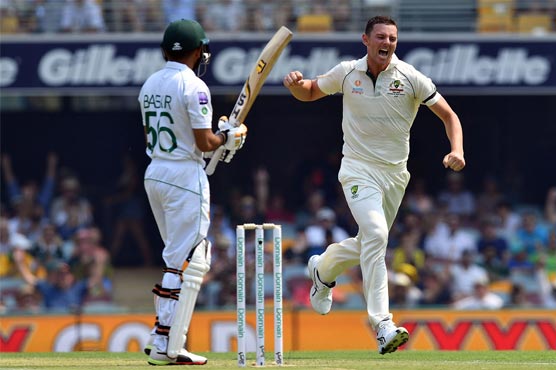 First Test Pakistan team out 240 in the first innings

First Test Pakistan team out 240 in the first innings

First Test Pakistan team out 240 in the first innings |In the first match of the Test series played between Pakistan and Australia, the batting line came up after a good start to the national team’s openers and the Pakistani team was dismissed for 240 in the first innings thanks to Asad Shafiq’s 76. In the first Test match played in Brisbane, Pakistan captain Azhar Ali won the toss and decided to bat. From the outset, Pakistani team openers Sean Masood and Azhar Ali batted cautiously but remained on the wicket, and by the break of the drinks, the national team scored 33 runs in 13 overs without loss. Both openers gave the team a good start, scoring 75 runs, with Sean Masood hitting the ball for Pete Cummins with 97 off 97 balls. Shaun Masood was supposed to get out of the national team players’ polar line and Azhar Ali was dismissed for 104 off 104 balls. After that, Harris Sohail and Asad Shafiq on the crease could not even have a partnership and left-handed batsman Harris Sohail lost his wicket on an aggregate score of 77. The next batsman after his departure was Babar Azam, who scored only one run and returned to the pavilion.

Asad Shafiq and Iftikhar Ahmed extended the team’s score a little further after scoring 4 players out of the total score of 78. Iftikhar Ahmed also scored a score of 94 in the 46th over, Nathan Lyon fell. After the half-team pavilion, the national team was under pressure and batted very cautiously, completing 100 runs in 46 overs 4 balls. After that, middle-order batsmen Asad Shafiq and wicketkeeper Mohammad Rizwan stepped up the team’s score and by a tea break, the Pakistani team had scored 125 for 5 in 52 overs. When the game started after the break, both players were leading the score so that wicketkeeper-batsman Mohammad Rizwan was bowled out for 34 off 37 balls. After a loss of 6 players, Yasir Shah came in to support Asad Shafiq and both players pushed the team’s score and the middle-order batsman completed his half-century on 99 balls. Both players were batting as Yasir Shah returned the pavilion with 26 runs off 83 balls on an aggregate score of 227. Later, Tenders Naseem Shah and Imran Khan did not get much resistance and the entire Pakistani team was out on a score of 240. For Pakistan, Asad Shafiq was the leading scorer with 76 while Australia’s Mitchell Starc scored 4, Pete Cummins 3 and Josh Hazel Wood took 2 wickets.

Mehwish Hayat reveals the secret of his charm

Bill Gates will continue to support Pakistan to eradicate polio