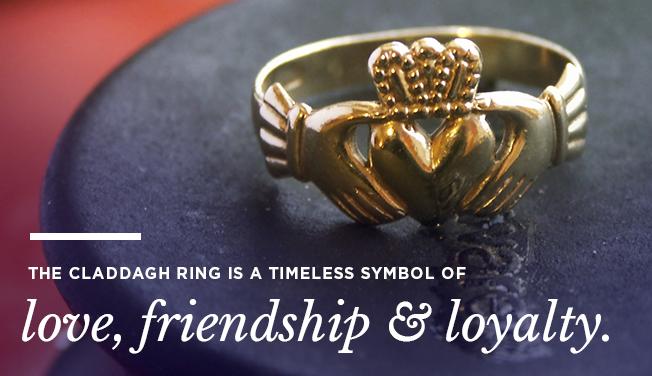 The Romantic Story of the Claddagh Ring an Irish Symbol of Love, Loyalty and Friendship

The Claddagh ring is a famous Irish ring with a love story that transcends time. The story of the Claddagh Ring is one of enduring love that began long, long ago in 1675 in the small fishing village of Claddagh in County Galway, Ireland. It all began when a young lad by the name Richard Joyce. The Joyce family is one of the famous Tribes of Galway. An Irish fisherman who was very much in love with an enchanting Irish lass he was hoping to one day betroth. Unfortunately he was captured at sea by pirates from Algeria. The wicked pirates sold Richard Joyce for a hefty sum into slavery. As luck would have it in an Irish sort of way Richard Joyce was sold to a Moorish goldsmith who taught him in his highly skilled craft to be an accomplished goldsmith. So impressed with his skill his captor made him his apprentice.

The claddagh ring is a type of fede ring from Roman times. A fede ring is one with two hands holding a heart to symbolize friendship and love. Richard Joyce added the crown to the design to symbolize his eternal loyalty to his true love.

In 1689 the King of England, William the Third persuaded the Algerians to release all enslaved subjects. Soon Richard Joyce was able to return to Ireland and the tiny fishing village of Claddagh to be reunited with family and friends. To his joy he soon discovered after all his years of servitude his true love had waited for his to return.

And just like that with a few hundred years of embellishment and a wee bit of the telephone game at play the romantic story of the Claddagh Ring was born. Now there are several variation’s of the claddagh ring legend but we think this version of the myth is most recognizable world wide. There are even more variations on the Claddagh ring design. Some early designs from over 200 years ago depict the Claddagh with a narrow or slender heart. Other older design depict the hands as more pronounced and firmly grabbing the heart.

The romantic Irish Claddagh ring design that can be expressed in so many different ways. Which one of our Claddagh rings is just right for you?

Why Charter/Spectrum deals are better for Streaming services

5 Steps To Become Stylish And Fashionable