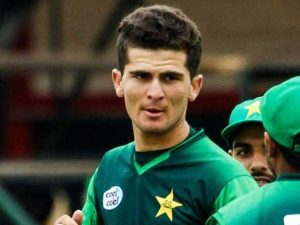 British journalist Shaheen Shah Afridi accused of using derogatory sentences|A journalist from the British Journal Daily Mail has claimed that Pakistani fast bowler Shaheen Shah Afridi was hurt during a press conference at the end of the second day of the second Test between Pakistan and Sri Lanka in Karachi. The sentences were used. Shafiq said that 19-year-old Pacer told him to come to the light so that he could be seen easily. A journalist named Asghar Ali Mubarak warned in his video message that if Shaheen Afridi and the Pakistan Cricket Board had taken up the matter. But he did not publicly apologize, so he took them to court The journalist claimed that Shaheen Afridi had violated the ICC Code of Conduct by giving such remarks to him. Asghar Ali Mubarak added that he was formerly a British. Captain Michael Atherton has forced him to go to court to apologize for calling Bail during the World Cup 1996. On the other hand, journalist Omar Farooque, a prominent cricket website, in his Twitter message, denied Asghar Ali Mubarak’s claim. The Pakistani journalist accused of racism is not true.

Can scientists become a nation