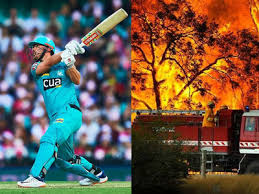 Australian cricketers to help victims |Australian cricketers come to the scene to help fire victims
Dangerous fires in Australia’s forests are worsening with each passing day, and cricketers are on the field to help the victims. Australia’s forest fires have affected thousands, affected hundreds of millions of hectares of land and killed millions of animals. Australian cricketers have come out to help victims in this difficult situation, while other cricketers around the world have also appealed for help to victims of the fire in Australia. Australian cricketers have announced that they will donate US $ 1,000 for every wicket taken during the Test match against New Zealand in Sydney. The Australian bowlers were able to take New Zealand twice in the Test match to take 20 wickets and thus a hefty sum of $ 20,000 will be donated.
In addition, in a Boxing Day Test match against New Zealand from December 26, Australian cricketers signed their shirts and handed them over to Cricket Australia and the proceeds from the auction will be donated. So far more than $ 30,000 has been recovered. Earlier, offensive temperament Australian opening batsman Chris Lin said he would donate $ 250 to the Big Bash League for each of his sixes, which Glenn Maxwell and DRC Short also announced to follow. Similarly, spinner Fawad Ahmed announced to donate $ 250 for every six and wicket while Adam Zampa announced to donate $ 200 for each wicket in India. Other players who have announced the donation include Peter Saddle, Ken Richardson, while Bigbush teams will donate money by auctioning shirts featuring their players’ signatures. Recently Australian cricketer Shane Warren will auction his baggie green cap and donate the proceeds from it to fire victims. Shane Warne, who has represented Australia in 145 Test matches, will be auctioning off his most valuable Australian Big Green cap. Proceeds from his auction will be donated to the Australian Red Cross Disaster Relief and Recovery Fund, and his baggy green cap will also have an autograph featuring Shannon Warren’s signature, arguing that Warren’s original baggy green cap is. Pakistani cricketer Shoaib Akhtar also backed Shen Warren’s move and called for the help of fire-affected Australians from all over the world, including Pakistan.