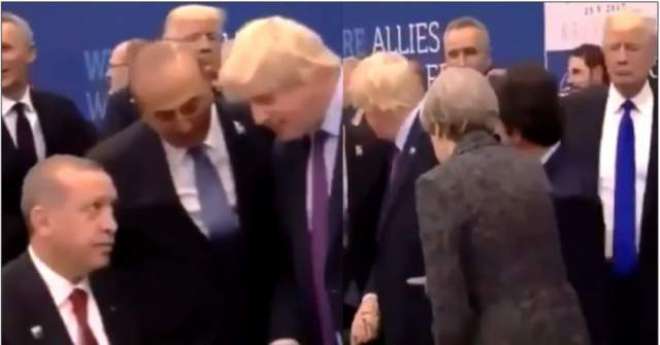 Another charisma of the Turkish president’s personality has surfaced all over the world|Turkish President Recep Tayyip Erdogan is widely acknowledged in Islam. On the contrary, the majority of Muslims currently consider him the greatest leader of the universe.
For the past few days, world leaders from all over the world have been camping in the US city of New York, which is the reason for the UN General Assembly meeting. Global leaders are also meeting each other on the occasion. One such incident happened in New York whose video went viral on social media. In this video, it can be seen that Turkish President Recep Tayyip Erdogan is sitting at a table talking to the heads of the world’s major global powers.
Britain’s nominee Prime Minister Boris Johnson and Germany’s Chancellor Angela Merkel. Meanwhile, an American president’s aide brought him to his desk to meet with Recep Tayyip Erdogan Muslim Twitter users around the world are delighted to see this video. The uploader of this video captioned, “Soon the eyes of the world will be resolved to address their concerns. Caliph Islam, the world’s most peaceful leader. “One Twitter user said that this shows that the Turkish president was really capable of translating the Islamic world and presenting the Muslim Ummah with a lively heart. That’s why the heads of world powers came to meet him. Are…