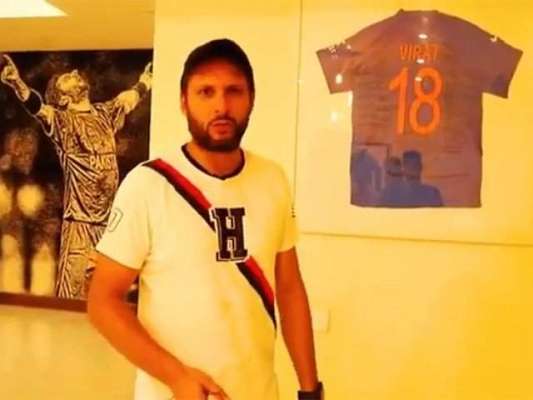 Afridi is touring the fans with his new home|The walls of the house have also been decorated with national cricket printers, shirts, trophies, and medals. Boom Boom Afridi introduces fans to his new home in Karachi. Shirts from world-renowned cricketers have also been decorated. Cricket Trophies and medals are also decorated on the walls of the house. Video of Pakistan cricket superstar Shahid Afridi’s house has gone viral on social media.

Shahid Afridi introduces his new home, saying it has become a haven for guests and cricket-related friends. The atmosphere in the village is also reflected in the basement of the house. Afridi said the village environment is like sitting on the ground, which is why they have arranged for the guests to eat on the ground.In the video, Shahid Afridi said he had also decorated shirts of famous cricketers. On the walls these shirts were decorated with frames which included shirts of Virat Kohli, Sangakkara, Shane Warne, De Villiers, Younes Khan. Inside view of Afridi’s house.

After the warm address of the Prime Minister, Tayyip Erdogan kissed him