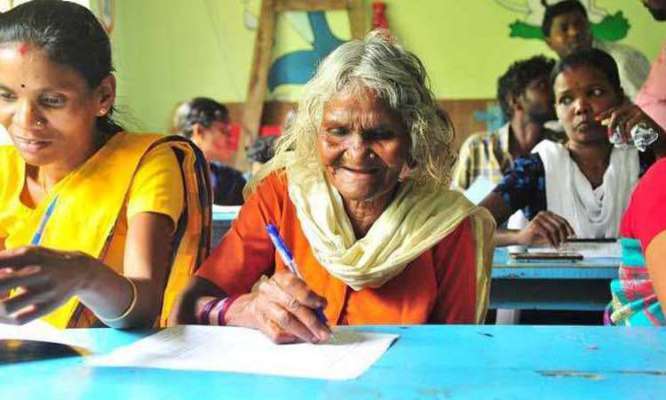 A 105-year old woman taking the fourth-grade exam |Bhagirathi, 103, from the Kolm area of the Indian state of Kerala, has recently taken Class IV examination and is becoming the brand ambassador of the Kerala State Literacy Mission (KSLM) in the district. He was not physically fit for this, so he took the exam at his house Nand Dham, under the supervision of a member of the Panchayat, at Thracarva Panchayat. Though he is 105, his actual age is 103 Years. We were told that when she was nine, she had to give up her education. And 94 years later, she came forward to pursue her dream. He added that we selected him as the district’s ambassador to promote our new initiative. With the help of literacy workers S Shirley and KB Vasantha Kumar and panchayat members, Bhagirathi Iman started this course six months ago. According to the South Asian Wire, literacy workers helped her prepare for home exams. The exam results will arrive in three weeks.

Vasanth Kumar said that although he had started writing the exam on his own, he later became tired and had to seek the help of his youngest daughter, Tanchamani, who became his scratch. According to South Asian Wire, She was married at an early age when she was pregnant with her youngest daughter. Her husband died. Thus, the burden of the family consisting of four daughters and two sons fell on her shoulders.