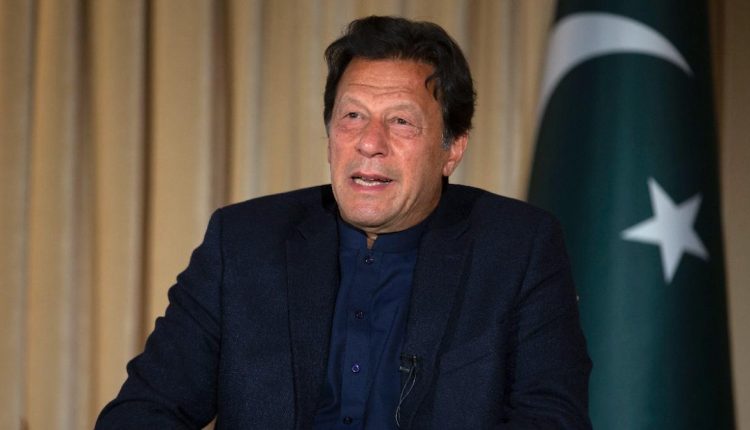 Prime Minister Imran Khan addresses the nation to discuss the performance of his government over the past three years.

Prime Minister says the last three years had been difficult because he inherited a bankrupt country from past rulers. The PTI government has completed three years of power. Prime Minister Imran Khan presented Thursday to the nation a report on his party’s performance at the Jinnah Convention Centre, Islamabad.

The prime minister opened the speech by welcoming all our chief ministers, governors, and leaders of AJK who just were elected. He then praised Sindh Governor Imran Ismail’s performance of his Tabdeeli song before his speech.

PM Imran stated that he wasn’t sure if the governor has more talent for governance or singing.

He recalls when his party was beginning and that “only five to six people were mocked because they were PTI representatives.”

The report is being unveiled at the Convention Centre Islamabad.

He greeted all the attendees and especially Azad Jammu & Kashmir government representatives.

He laughed and said, “I was looking at Faisal Javed Khan.” He never stops being enthused when he takes out a microphone, just like in our jalsa days.

Premier Imran Ismail also praised Sindh Governor Imran for his ability to produce PTI anthems. He said it could well out shadow his performance as governor. Ismail sang “tabdeeli Aayi Re” at the event and hummed a tune for “Mujhe Kyoon Nikala.”

Prime minister highlighted the importance of youth realizing that prayer to God for blessings is not a path to ruin but a path to the Holy Prophet (PBUH).

“God has already shown us the way to greatness if we want to be great.”

“Our reserves [were] low, but our liabilities [were] high.” We had no money to pay back our debtors. We weren’t going to default; we were actually in the process.

He also mentioned other challenges, including the coronavirus crisis and the Pulwama incident.

The prime minister spoke out about how he was ridiculed in the party’s early days but said that he remained focused on one thing: How the Holy Prophet (PBUH) saw so many difficult times and remained determined.

We must not fear such times. This is a difficult time for Pakistan, but we should not panic.

He said, “The ups & downs of life prepare you for greatness.”

He addressed the youth and said, “Don’t ever believe that life is easy.” It is not accessible if it is so.

“Whoever is determined to follow the right path must face obstacles. Every messenger of Allah faced difficulties. This is the path that we believe in.

“But people seek an easy way out and the path of blessings […] they must not cry over such times.

He said, “If you can understand and analyze such things properly, you will see the tough path to your success.”

Premier added, “No one has ever achieved success without failing.” It is impossible to land on one’s feet.

“No one can become a leader by taking shortcuts. Take a look at Quaid-e-Azam’s struggle. He is the leader that I believe in.

He struggled throughout his illness, particularly towards the end. He didn’t do it for personal gain. He did it for a greater purpose. This is why people will continue praising him.”

The Ministry of Information and Broadcasting has compiled the Report 2018-21. It focuses on government achievements despite the global recession that followed the coronavirus pandemic.

This 251-page report provides an overview of the accomplishments of 44 public agencies, including ministries, divisions, and departments. It not only defines the baseline for each sector but also highlights vital objectives and updates on initiatives.

The government of Pakistan Tehreek-e-Insaf was faced with many ‘inherited challenges’ upon its August 2018 election. These included financial instability, poverty, inadequate education, and poor health facilities.

The government has seen many achievements in the last three years. This includes the maintenance of COVID-19 and the use of the intelligent lockdown strategy. The Economist recently ranked Pakistan as the third-best performing country in handling the pandemic. Key achievements include administering 30 million doses of vaccines in the country and self-sufficiency in manufacturing Personal Protection Equipment.

The Ministry of Information and Broadcasting and Focus “Focus” (on] the achievements made by the government despite global economic slowdown following the coronavirus pandemic” compiled the report for 2018-21.

The report, which is 251 pages, highlights 44 public bodies (ministries, departments, and departments) through infographics and pertinent facts and figures.

The official website of the Directorate of Electronic Media and Publications Radio Pakistan will have the report.

Fawad Chaudhry, Information and Broadcasting Minister, said that PTI could “proudly display its performance” about the report’s launch. [The past] Three years of the nation.

To raise the dignity of the common man, the government launched projects like the Naya Pakistan Housing Programme, which provides affordable housing for low-income families, the Ehsaas program for social security, and the Kamyab Jawan Programme, which teaches skills to young people to help them find employment.

54 laws were passed in the area of legislation. These included the Code of Civil Procedure Amendment Act, 2020; Enforcement of Women Property Rights Act 2020; and Legal Aid and Justice Authority Act 2020. This was to assist the poor and vulnerable sections of society.

The prime minister stated that “until you go through struggles, nothing big can be done.” No leader can be great if they take a shortcut. Quaid-e Azam was a great leader. “He struggled throughout his life, and people will always remember him for that.”

PM Imran described his government’s difficulties in the economy over the first three years of their five-year mandated tenure. He said he had inherited an economy headed towards bankruptcy.

“We didn’t have enough capital to pay off our loans. We had no foreign exchange. We had a current account deficit of $20 billion. He said that if Saudi Arabia, China, and UAE hadn’t helped us, the rupee would have fallen further and caused us real damage.”

He spoke out about the government’s handling the coronavirus pandemic. He recalled how he had resisted the urge to impose a “blanket lockdown” and was protected by the graces of Allah.

He said that the WEF (World Economic Forum) praised Pakistan’s handling of Covid-19 and that the Economist [acknowledged] Pakistan as one of three countries which effectively combated the coronavirus.”

“The NCOC (National Command and Operation Center), a team that included Asad Umar and Faisal [Sultan] made great decisions and survived the worst of Covid.”

He claimed that Punjab’s anti-corruption efforts have recovered Rs450bn during their tenure. “NAB (National Accountability Bureau) had recovered Rs290bn in 18 years before we came to power. In the last three years, they have recovered Rs519bn. This is the reason for all the commotion.

He also spoke out about his government’s social-uplift schemes like Kamyab Pakistan or Ehsaas Program. The latter was rated by the World Bank as “third best” in the world.

Premier reminded his audience about the efforts to “empower women in rural areas” and stressed the importance of education for women. He also stated that this is what he was trying to accomplish.

“I thank God that we have the kind armed forces we have. I was shocked when [India] attacked us at night. It made me realize that what would we do to defeat such a powerful enemy?

“And this mafia who gave speeches against our Army I also have spoken out against the Army in the Past everyone makes mistakes, but it is not the goal to denigrate them.

The premier stated that the Indian lobby was trying to denigrate the Pak Army for quite some time.

They want the Army to overthrow the government. You claim to be a democratic government, and you want the downfall of a democratic country. He said this in criticism of India.

He stated that Pakistan’s confidence in its Army enabled it to tell Modi that Pakistan would provide a fitting response to any attempt at retaliation.